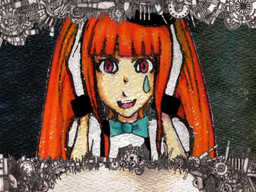 ■ I uploaded before Halloween.

■ Happy Halloween!”
—Author's comment "Mrs.Pumpkinの滑稽な夢 (Mrs. Pumpkin no Kokkei na Yume)" is a song featuring Hatsune Miku by Hachi. This song was uploaded in celebration of Halloween. The lyrics are vague and open to interpretation.

The jacaranda's blooming, an impolite exchange of speeches
Where shall we go? A merrily weeping song
Jack laughed, "Leave your heretical feelings behind!"
Give me chocolate, a begger's weeping song

A scarecrow suddenly shaking with sobs
Prejudiced against pumpkin pie

Oh la lu la lu la, will you dance with me?
The moon's still sleeping
("You called? You called?" asks Turnip-Head)
See? Now all the caskets are gone
How boring

Jack got all huffy, "Keep your obscene emotions!"
The datura bloomed as if to spite me

The goats are up to something...
Waiting for the train

Let's hold hands, two may pass
Wandering home through the tube
(Superior, inferior, a pile of corpses?)
See? In the swarm of ants at the swap meet
The moon's still sleeping

"Hey! Mrs. Pumpkin! I'm here to escort you home!"
When did this night destroy my dream?

I want to stay here and dance!
Derangement like a dream
(Inferior, inferior, a pile of fools)
The joy I spit out lit up by the lanterns

Oh la lu la lu la, will you dance with me?
Not that I expected an answer
("Too bad! Too bad!" says Turnip-Head)
See? Now all the caskets are gone
How boring
In the settled mud
Waiting for morning in the thicket
On the train