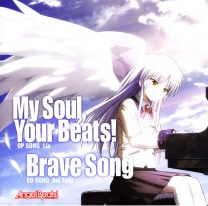 "My Soul, Your Beats!" is a Japanese cover song featuring IA. Original sung by IA's voice provider Lia, it was produced initially for the hit animation Angel Beats!, which ran from 2009-2010. It was used as a promotional demonstration song prior to the voicebank's release.

This song exceeded 100,000 views on SoundCloud.

"1st Place 10 - 11th Celebration LIVE: "KEEP HAVING FUN!'" was an event organized by 1st Place in celebration of over a decade of existence, featuring artists under queens label and IA PROJECT record labels, as well as several musical guest appearances. IA was featured in a hologram/live segment performing songs from producers/musical artists Shizen no Teki-P, Ishifuro, and ASY. She performed SEE THE LIGHTS, LIVEDRIVE, Headphone Actor, One Two Hello, America, "My Soul, Your Beats!", and World Calling.

Retrieved from "https://vocaloid.fandom.com/wiki/My_Soul,_Your_Beats!?oldid=1064395"
Community content is available under CC-BY-SA unless otherwise noted.