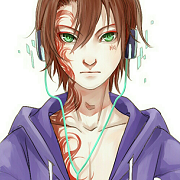 Na Lan Xun Feng (Simplified: 纳兰寻风; Traditional: 納蘭尋風; Pinyin: Nà Lán Xún Fēng) is a Chinese producer who made their debut in April 2013. They are known for their high quality and flexible tuning style.

For a time, they were also the developer of Zhang Chuchu's voicebank before departing from Shanghai Wangcheng Information Technology Co. Ltd..[1][2]

On March 3, 2018, Na Lan Xun Feng became the seventh Chinese producer to reach 100,000 followers on bilibili. Their most notable work is their cover of "Qiān Sī Xì" featuring YANHE.

Their birthday is May 12.

Retrieved from "https://vocaloid.fandom.com/wiki/Na_Lan_Xun_Feng?oldid=950105"
Community content is available under CC-BY-SA unless otherwise noted.