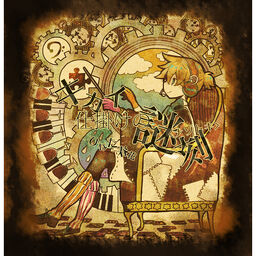 Nazotoki and Nazokake are Hinata Haruhana's biggest hits. On February 19 she uploaded the song Nazotoki, with her as the vocal. A month after, Hinata Haruhana uploaded the 'Vocaloid' version sung by Kagamine Len. A year later, the series was sold on an album called Mechanical Mystery.

Hinata Haruhana has stated that all of her songs are connected to each other in some way. The only confirmed songs to be related are Nazotoki and Nazokake.

Nazotoki and Nazokake are originally stories written by Hinata Haruhana "Umi ha sono nazotoki wo nozomu noka?" (海はその謎解を望むのか？). The ones sung by Rin and Len are the 'Vocaloid' version of the story, in which Len plays Haruka's role while Rin plays Akira's role.

A novel adaptation of the song "Nazokake" written by Hinata Haruhana and illustrated by Yon published from Poplar Pocket in July 2014, is also loosely based on this story; with a similar set of characters, the main difference being the two main characters "Kurono Rin" and "Shirohane Len". A hardcover version of the novel was available later in April 2015.

The series tells about a boy (Shirikawa Haruka/Len) who used to be a child prodigy at piano, and liked a girl (Kuromiya Akira/Rin) for many years. One day the girl's home caught on fire (arson), and the boy saved her, losing his arm in the process.

He continued liking her for many more years, even though he saw her with someone else (Let me Play the Piano?) and in truth the girl liked him too (Snow is Falling?).

Haruka, now assistant to Detective Mikami, and Akira, unknowingly went on the same fancy boat party, by an unknown benefactor. What happened next was a string of murders, such as a man dying from poisoned wine, and people falling into the ocean.

Haruka then discusses the murders with Akira and claims that he did the crimes, while Akira believes he hadn't, and it still remains a mystery...

A doujin illustrated by Abe, the original illustrator of the series entitled "Nazotoki"

Image for the extended pv of Nazotoki illustrated by Abe.

The cover of the novel "Nazokake" illustrated by Yon

Retrieved from "https://vocaloid.fandom.com/wiki/Nazotoki/Nazokake?oldid=993548"
Community content is available under CC-BY-SA unless otherwise noted.