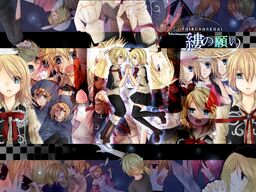 The New Millennium Series is set in a ruined future, where the remaining survivors had to dispose their flesh bodies and replace them with new artificial bodies, in order to survive the consequence of discarding their humanity in the process. The last humans now are hunted by the machines, however a hope still exists.

There is also an それでは皆様、よい終末を describing the whole series, which focuses on the different floors of the elevator.

Retrieved from "https://vocaloid.fandom.com/wiki/New_Millennium_Series?oldid=843122"
Community content is available under CC-BY-SA unless otherwise noted.