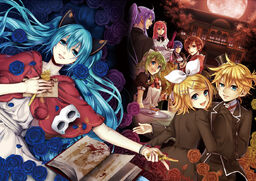 Bad ∞ End ∞ Night / Crazy ∞ nighT / Twilight ∞ nighT / EveR ∞ LastinG ∞ NighT is a series composed by Hitoshizuku-P x Yama△, with Suzunosuke (illustrations), Hidari (original character design) and TSO and VAVA as the PV artists. The series consist of four songs: "Bad ∞ End ∞ Night", "Crazy ∞ nighT", "Twilight ∞ nighT", and "EveR ∞ LastinG ∞ NighT", all of which are featured on the EXIT TUNES compilation albums "Vocalodream" "Vocaloconnection" "Vocalosensation" and "Vocalospace".

The songs "Bad ∞ End ∞ Night", "Crazy ∞ nighT","Twilight ∞ Night" and "EveR ∞ LastinG ∞ NighT" center about a Villager Girl who finds a "mysterious" mansion, but written in different perspectives (those who live there, the Villager, etc).

This series is not involved with the similarly named Night Series.

Bad ∞ End ∞ Night was the first song uploaded as one of the tracks for Exit Tunes compilation Vocalodream, with the compilation's theme being Gothic / dreams. Later on in EXIT TUNES' newest compilation Vocaloconnection, Crazy ∞ nighT was uploaded and hinted at a continuation to the mini series. This was later revealed to be Twilight ∞ nighT, featured in Vocalosensation . In the lyrics section of Hitoshizuku-P x Yama△'s first major debut album, EndlessroLL, both Bad ∞ End ∞ Night and Crazy ∞ nighT were listed under "Bad End".

The story revolves around a mansion trapped in time with the house's inhabitants, a villager, a faded letter, and an unknown shadow. The house is inhabited by the Head of the House, his Wife (Lady of the House) and their Daughter. The Girl Doll and the Boy Doll seem to be alive, speaking crazily. The serving staff is conformed by the Butler and the Maid. Finally, there's the Village Girl, who comes to the mansion at night, and the Mysterious Shadow, who seems to be the audience of the play and possibly the one controlling it all. Together, the characters "perform" in a play called "Crazy ∞ nighT", though none truly understands what is happening.

The series ended on September 3, 2014 with the release of the fourth and final song, EveR ∞ LastinG ∞ NighT, featured on the Vocalospace album. The final video was released on September 11, 2014.

The following information is taken from the Bad ∞ End ∞ Night novels and may contain spoilers.

Miku as the Villager
An up-and-coming actress in the Burlet Company. She was chosen to play the lead role of Crazy ∞ Night after her audition.

Rin as the Doll Girl
Len's twin sister. She has a fierce fanclub of supporters. A child prodigy of the company.

Len as the Doll Boy
Rin's twin brother. A shy child prodigy. Many of his fans are rich gentleman bigshots.

Luka as the Lady
The Burlet's Company star actor, possessing an overpowering beauty. She also works as a model.

KAITO as the Master
Serves as a leader organizing the Burlet Company. He is both an actor and the stage director.

MEIKO as the Mistress
An actress of the Burlet Company. She is renowned for her bewitchingly precise, finely-detailed performances.

Meg (GUMI) as the Maid
An actress of the Burlet Company who also writes on the side. She has eccentric sensibilities.

Gack (Gackpo) as the Butler
An actor of the Burlet Company. Manages an independent farm as a second job. He has a diligent and gentle personality.

Bad ∞ End ∞ Night is a novel split in three volumes, written by Hitoshizuku-P with illustrations by Suzunosuke. It was released on September 28, 2014 with more information about the series and bonus content, deepening the situations featured in the songs.

Bad∞End∞Night～インセイン・パーティー～ (Bad∞End∞Night～insane party～) is a manga illustrated by Nozaki Tsubata and supervised by Hitoshizuku-P and Suzunosuke. It was released on December 10, 2014. The story takes place over three manga volumes and is available in English by Seven Seas Entertainment, LLC. 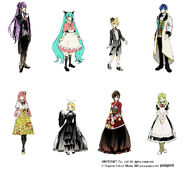 Promotional artwork for the song "Bad ∞ End ∞ Night" by Suzunosuke

Promotional artwork for the song "EveR ∞ LastinG ∞ NighT" by Suzunosuke