Vocaloid Wiki
Register
Don't have an account?
Sign In
Advertisement
in: Series Work in Progress, Series, Japanese series,
and 15 more 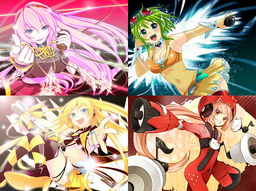 The Night Series, known on Niconico as the SAM Night Series (SAMナイトシリーズ),[1] is a series of Eurobeat songs by samfree. It is made up of 14 songs sung by various VOCALOIDs/UTAUs. Ten of them have been uploaded to Niconico, with the other four being album-exclusive.

The songs are characterized by sharing the same pattern or rhythm, a similar title style (the VOCALOID's name repeated two times, a star and a catchy phrase with the word "night" in it), and a release date shortly after the debut of a new VOCALOID. In fact, it's almost a tradition for some of the newly released Japanese voicebanks to receive a song, as a sort of welcome. samfree's death marked the end of the series with Yuka Yuka☆Heavenly Night being the final song.

This series is not involved with the similarly named Night ∞ Series.