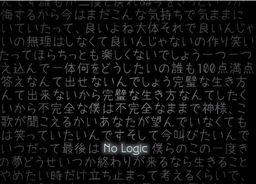 "No Logic" is a song by JimmyThumb-P featuring Megurine Luka. It has entered the Hall of Legend. The song seems to be about following your heart, since no one can be perfect.

The song can be found on the EXIT TUNES compilation albums Vocalolegend and Megurhythm. In addition, it is featured on the albums MOER feat.初音ミク -2nd anniversary-, Unplugged Stray, 初音ミク -Project DIVA Arcade- Original Song Collection Vol.3, and Ichigo Ichie.

As part of Luka's 10th Anniversary, JimmyThumb-P released an arrange version of this song for the album Megurinemotion using her V4 voicebank having a few noticeable changes.

from D to T's Fanmade PV 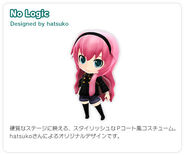 Luka's "Logicist" module for the song "No Logic", designed by hatsuko, featured in Project mirai.

Retrieved from "https://vocaloid.fandom.com/wiki/No_Logic?oldid=980024"
Community content is available under CC-BY-SA unless otherwise noted.