Vocaloid Wiki
Register
Don't have an account?
Sign In
Advertisement
in: Hall of Fame, Hall of Legend, Original songs,
and 8 more

"Nostalogic" is a song featuring MEIKO by yuukiss. The song became one of the triggers for the "Loli Meiko" also the development of the official derivative Sakine Meiko by Nanameue-P and Daigoman. It's featured in the album "VOCALOID Produced by Yamaha". The long/full version, featuring the PV by yumiko, was uploaded 2 years after the original, which surpassed the original in popularity.

The song has various meanings; it may tell of MEIKO who longed for the days of the past. Yuukiss has a tendency to add parts of lyrics / melodies to his other works (so they all are somehow connected); a melody of Nostalogic can be heard in the song "FLOWER TAIL" sung by KAITO; and "FLOWER TAIL" has similar lyrics with "Fairy-taled" sung by MEIKO. Some may interpret that, even though the genre and singers of the three songs are completely different, they may be related in terms of lyrics and melody.

On November 5, 2014, yuukiss uploaded a version called, "Nostalogic (MEIKO-SAN mix)" in celebration of MEIKO's 10th Anniversary. This version uses MEIKO's natural tone as opposed to "Loli Meiko". It was however, featured in the album Vocalospace beforehand. This day also marks it where Nostalogic had reached #1 on NicoNico Daily VOCALOID Ranking.

On November 8, 2015 the single edit version had reached one million views, reaching the Hall of Legend. 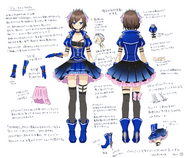 Concept art for the module "Blue Crystal" by Anko. 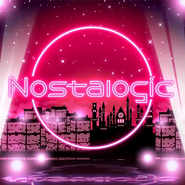