Vocaloid Wiki
Register
Don't have an account?
Sign In
in: Hall of Legend, Original songs, Japanese songs,
and 8 more 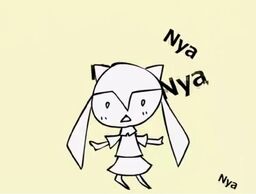 '"Nyanyanyanyanyanyanya!" is a song featuring Hatsune Miku by daniwellP. Nyan or nya is the Japanese onomatopoeia for meow (the cat cry): thus, the title means Meow-meow-meow-meow-meow-meow!. The song is an endless loop of Miku saying "Nya" over and over while pouncing. Back in 2010, this song was obscure to those outside the VOCALOID and UTAU fandom, until Momo's version came into light.

On April 5, Saraj00n uploaded a video of a Poptart Cat with UTAU Momone Momo's voice on YouTube. The song became popular, under the name of Nyan Cat. It quickly spread around and became an internet meme appearing in multiple sites, blogs, and social networks. It quickly rose to fame over the next few months, and there it started about the origin of the song. The meme has become so popular that daniwell has accepted the name Nyan Cat as the name of an official album.

It has entered the Hall of Legend.

It was during that time a few people visited daniwell's original video and Momo's Niconico Video cover, helping it getting more views. At the same time, it helped spread the VOCALOID fandom around the West even more.

The confusion died down after a few months prior to the Nyan Cat Video, but it left a bad impression on both sides.

A screenshot of Miku singing the song in -Project DIVA- f.