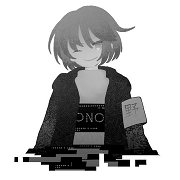 ONO, also known as Xiaoye Dao (小野道; Xiǎoyě Dào), is a Chinese producer who made his debut in April 2012. He specializes in electropop music.

In collaboration with Vanguard Sound, he made his VOCALOID debut with "Wagamama" featuring Hatsune Miku, and many of his early works used her vocals in addition to Xingchen's. After becoming affiliated with Quadimension, his popularity received a boost, and he later became one of the most well known members within the circle.

His birthday is June 17.