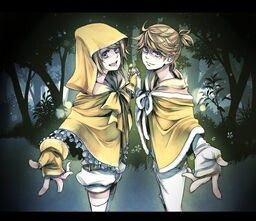 The Original Sin Story (原罪物語 Genzai Monogatari), formerly known as The Original Sin series or 始まりの罪シリーズ(Hajimari no Tsumi "First Sin/Crime series"), is a series of songs made by mothy, also known as Akuno-P. This series is composed by eight songs, with four of them being album exclusive releases.

This series is strongly inspired by the Brothers Grimm's tale: "Hansel & Gretel" and in some aspect of the Book of Genesis, particularly the Original Sin and the Fall of Man.

Set in the Magical Kingdom Levianta and in the deep woods of the fictional country Elphegort, this series is the beginning of mothy's complex storyline: The Evillious Chronicles and the prequel to the Seven Deadly Sins series.