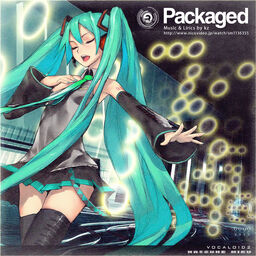 "Packaged" was the first Vocaloid song released by kz and was one of Hatsune Miku's early hits. In the song, Miku sings her gratitude of being "unpacked" and receiving the ability to sing. With over one million views, the song has entered the Nico Hall of Legend.

"Packaged" was one of the crucial songs that originally helped make Miku popular and set a model of Vocaloid personification, along with "Miku Miku ni Shite Ageru" and "Koisuru VOC@LOID".

The song, along with its piano version, is featured on the album Re:package, which was the first Vocaloid album to be released by a major record label. A remix by baker was played at Mikufes 09 and another, more electro-oriented remix by kz himself was played at Voca Nico Night 4 in 2013.

I'm looking for that grain of sound
That slipped out of the palm of my hand
I wrapped my feelings in a package
To send them to you, and only to you

I hope my voice doesn't fail me
I'll do my best to sing it right!

Retrieved from "https://vocaloid.fandom.com/wiki/Packaged?oldid=950798"
Community content is available under CC-BY-SA unless otherwise noted.