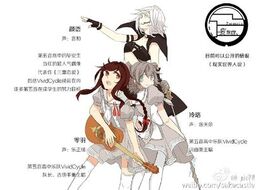 The Paranoia series is a multi-media series consisting of 9 main-series songs, 6 bonus songs, and a webnovel (written by Yu Li). The series tells the story of a girl named Ling Luo, who is trapped in a deep swamp of paranoid delusions after her friend, Ling Yu's, sudden departure. The story covers Ling Luo's self-turmoil as she struggles with the choice between staying in the safety of her delusions, and returning back to the real world.