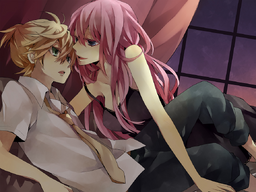 “完璧に今、君を手に入れる。 Now, I get you to perfection.”

The song talks about a forbidden romance between Luka and Len. Due to several factors that keep them from being together, they begin to meet in secret. Calling their romance a "Perfect Crime", they say they never left evidence.

Retrieved from "https://vocaloid.fandom.com/wiki/Perfect_Crime?oldid=1047860"
Community content is available under CC-BY-SA unless otherwise noted.