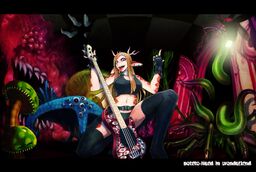 “It seems like Hatsune Miku is lost in wonderland.”

Utsu-P's 20th original VOCALOID work, about a girl being driven to the pacification of inflicting wounds on herself as her classmates bully her.

Retrieved from "https://vocaloid.fandom.com/wiki/Potato-head_in_wonderland?oldid=1130733"
Community content is available under CC-BY-SA unless otherwise noted.