According to Zero-G, they looked at what was missing and decided that there was a gap for a classical soprano voice. This voice type was decided during MIRIAM's release in 2004, along with a choir type voice.[1] Prima's voice provider was a professional singer who answered an advertisement that was placed on a music academy website.

After some test samples in the VOCALOID software, they decided to go ahead and record her voice for the VOCALOID2 software.[2] Demos released for her included "Lakme Flower duet Delibes," amongst others.

She was unveiled to the general public in February 2007 and was originally set for a Spring 2007 release.[3] Prima was first demonstrated along with Sweet ANN and BIG AL at the NAMM show in 2007. When Sweet ANN was released, PowerFX was asked about Prima, and stated that they had not heard anything from Zero-G, presuming a delay in development.[4]

Prima was released into Taiwan by e-capsule. She received a new boxart and was featured in a demo that had both a long and short version, "Entrust." 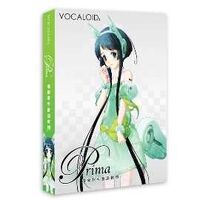 At the end of 2015, it was announced that from March 31, 2016, VOCALOID2 was being retired and no new serial codes were be issued by Yamaha. Zero-G announced that they would continue to issue import codes to legitimate owners of Prima, SONiKA and Tonio.[5]

A demo version was planned to be released on the Zero-G website; however, it was cancelled and never added.