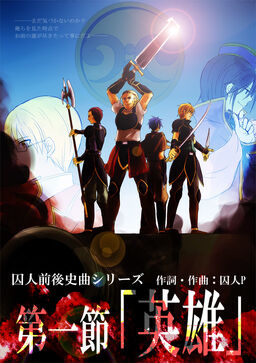 The Prisoner Series was first uploaded by Shuujin-P with Len narrating his life in his point of view (however the first "original" version was sung by Rin; later it was removed from Shuujin-P's mylist of VOCALOID song, however is still available to see in his channel), and later Paperplane was uploaded to tell Rin's side of the story. It tells about the world, and war at that time. Characters such as Rin's father is shown in this series.

Overall, there are no VOCALOID characters in this series; and they're all Shuujin-P's OCs. Although they may look alike, the main characters of each chapter is NOT Len. They share similar features and is voiced by said VOCALOID, however they are not the same person.

The empire of Crypt (帝国クリプト) is habitated mostly by the (ロイド) Loid race. It's also known as "Cryptonia" (クリプトニア). The Empire of Crypt is one of the three kingdoms which participated in the first World War along with the other two Kingdoms. Most of the main characters are from the Empire of CRYPT (e.g. Rix Milan, Kaimu, etc)

The Federated States of Stein (スタイン連邦) lies on the west of; where mountains rage. Like the Empire of CRYPT; it's one of the three kingdoms which participated in the first World War along with the other two kingdoms.

Judging from the uniform, Rin's father from Paperplane have a similar outfit to the soldiers from Kingdom of Cake. This might be where Prisoner / Paperplane takes place.

"Catayume" (Catastrophe no Yume / Dream's Catastrophe) is a fully voiced visual novel (introduced in the official site as a "PC Game"). The music, scenario, and original story was written by Shuujin-P and developed by the circle "Shuujin Family". Catayume's story occurres after the song "Tomorrow", with the main character being Rax Milan; along with his brother (Rix), sister (Angeluka), and her childhood friend (Ril).

It's voiced by several notable utaites such as 96Neko, Kogeinu, ShounenT and several more. It's mainly illustrated by Nazyo (character illustration).

The game Catayume was available for purchase from Toranoana, however there is none currently in stock to date. However, the soundtrack of the game is still available for purchase in JOYSOUND. Those who have bought the game could also download patches to the game; the most recent patch being early February 2012; and can be found on the official site.

The story takes place during / after "Tomorrow" and centers on Rix Milan. It centers the Loid clan of the Empire of Crypt after the horrible war between the three kingdoms triggered by the Kingdom of Cake.

Rafatel, the leader / "hero" of the war whose troop bring glory to the war in the side of Crypt (more can be read in the song; Chapter 1: Heroes), has two rather ambitious sons; Rax Milan and Rix Milan whom tried to be just like their father; a hero, a warrior, a knight, someone they rather look up upon to very much. They were still very young (Rax Milan; 16 years old, Rix Milan; 13 years old).

A chance of a bad end for the two brothers and their childhood friend Ril; may happen and to not be able to see "tomorrow" is a possibility. Having to live in a castle for nobles; there may be things they've yet to discover about the world.

This series was also adapted as a game Catayume by Shuujin-P. The characters however does not involve the VOCALOIDs; (e.g. Rix Milan is voiced by the utaite 96Neko).

Retrieved from "https://vocaloid.fandom.com/wiki/Prisoner_Series?oldid=843129"
Community content is available under CC-BY-SA unless otherwise noted.