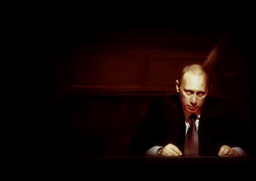 In total, there are 34 songs in the series:

In the series, Miku, Rin and Len are Vocaloids, Luka is a human named Elena, and Camui Gackpo is also a Vocaloid.

Other things to keep in mind, Russia and America's relationship is crucial to the series. One of the most likely reason they were chosen is because Ronald is an icon of American culture while Putin is the leader and represents Russia.

This page mainly covers interpretations and common FAQs, as well as general information. Separate parts have been made for each part of the series.

(Further timeline in each part)

It all started in 1976, at the heart of the Cold War, and it took 14 years to bring McDonald’s to Moscow. After 14 years of intense negotiations with Communist Party politicians to open its first outlet in the Soviet Union, a quote from Loshak was:

"McDonald’s was not so much a fast-food chain but rather a symbol of freedom. A symbol of Western values coming to Russia. No wonder the Communist Party objected so fiercely, but at the end it didn’t have a choice."

McDonald then set up a branch in Russia on January 31, 1990; not too long after the Cold War between America and Russia ended.

Vladimir Putin became head of the Committee for External Relations in 1991 and became president in the year 2000. He was re-elected president of Russia in 2012, and will hold office until 2020. The collapse of the Soviet Union happened around 1991, at that time, Russia was at great turbulence. Oddly at the same time, McDonald's restaurant too was suffering in an economical peril during the late 1990s.

The child-soldier named Irina lived with her dog in this era.

Rin and Len were released on December 2007 by Crypton (or in this series, it's just 'the factory') who set their ages as 14 year old. Do note that they're Vocaloids and not exactly humans; so they might not be effected by age.

Rin and Len from the Vocaloid Era were previously programs made by Elena that were made with the memories of Irina and her dog from the Russian Era; at some point, their "memories" of the Russian Era were erased and stored in disks kept by their producers. Miku, on the other hand, was a Vocaloid in the Russian Era that was utilized by Urusei Teppannov before she separated from him and became an idol in Japan. When the subtitles in the videos change from yellow to red, it usually means the Vocaloid is speaking under their former programming.

These are the main Vocaloid characters in the Putin-P series.

These are the main characters based on people in real life.

Who's that guy in the beginning of each video?[edit | edit source]

He is Vladimir Putin, the current president of Russia. Not to be mistaken with the composer of the series Putin-P / Numtack05.

Read more in his section of the page .

It is confirmed by Numtack05 on his blog that Rin says "nya" as an a way to look cuter by an association with cats, as also shown when Rin wore a cat outfit while singing Assassin!. Rin in particular tries to associate herself with kittens by replacing the word "nya" with certain particles.

The two fell in love anywhere after Rin and Len began attending Miku's school, as she begins changing her outfit and eating fries after Magic is Heresy. The two have an increasingly deeper relationship and is regarded as true love that affects Miku for the entirety of the series. Ronald himself is a joke character, as the original premise of the Putin-P series in fact was to make funny videos involving Ronald McDonald. Despite this, Ronald in the series itself is a real character with a physical presence, not metaphorical. Subsequently, he leaves an impact on the story and other characters.

What is "LaLaLaLa Happy"?[edit | edit source]

Lalalala Happy had appeared in the following songs:

Lalalala Happy is sung whenever the characters are on drugs or denying reality.

Why doesn't Part 1 have any pretty pictures / videos!!?[edit | edit source]

It is explained in Track 0; It's the End! that Rin had arrived on the internet. Not too long after Hatsune Miku's release; Crypton announced a new Vocaloid "Kagamine Rin" back in November 8, 2007.

The very first illustration of Kagamine Rin on the internet (not counting the silhouette Rin in Crypton's blog) was the illustration in Part 1; which represents that "Rin had just reached the internet"

The reason why Len isn't there even though he sang in Part 1 is because at first Crypton only wanted to make Rin, while the only available pictures of the Kagamines at the time were their silhouettes, their chibi versions, and a picture of them together.

Each Vocaloid has a default subtitle color which include the following:

The subtitle color changes whenever their former programming is speaking. Sometimes due to the PVs the subtitle colors are white (Example: The Eyes that Don't Vanish.). In special cases, such as Under the Cherry Blossoms, Rin's subtitles are completely pink.

Who is "Human Len" in the Russian Era?[edit | edit source]

The "Human Len", a separate character from the Vocaloid Kagamine Len, is an unknown boy who lived in the Russian era. He's known for wearing two scarves, one red and one yellow. In Farewell to You he's shown wearing the yellow scarf over the red, while in Stealing is Wrong? he only wears red because the yellow was stolen, as shown in No Need to Worryy!!. Because of the theft of his yellow scarf, the boy shot the dog. The timeline is like this:

Numtack05's nickname of Putin-P and Teihen-P are not to be confused with the actual characters in the story of the same name, identified in a January character poll. Teihen-P is identified as Rin and Len's producer, with Putin-P's role in the story not specified.

A mini trivia on Teihen-P's name: teihen is a "base" on the bottom of a triangle, and the term "base" in the series is used typically as an insult.

Fiction VS Reality; I can't tell the difference![edit | edit source]

There are various references to the real world and real historical events and concepts; additionally, real people are used as characters in the story, like Vladimir Putin. Numtack05 has joked for people to not get confused about what is just part of his crazy story and what really happened. He at one point clarified that the story itself takes place on computers, hence the ability for media characters like Ronald to make physical appearances alongside computer programs like the Vocaloids.

Like a somewhat repeating loop; Part 1 begins with It's the End!, and finishes with It's the Start. Rin was first introduced by Crypton in November 2007, or "Reaching the internet".

Then in the song Don't Leave me Alone. Len came in the picture. At this point the series starts to get what people would call "abnormal". Starting out with Putin, Zangeif, Ronald McDonald, and other uploaders/producers.

Part 1 introduces the viewers to drugs, murders, and the basics of the Putin-P series.

Part 2 introduces Hatsune Miku, and more about her boyfriend Ronald McDonald. It also introduces the "Scarf Incident" in which the dog stole the scarf which triggered his, Irina's, and Irina's Comrade's death.

Several other confirmed facts in this Part are how Len has the memories of the dog in the Russian Era, and how it all started. While Part 1 introduces more about Putin and the "Vocaloids", Part 2 focuses on the history of the cold war.

This Part also has the song "The Eyes that Don't Vanish.", the most popular song in the Putin-P Series.

Part 3 introduces Camui Gackpo and Megurine Luka, named Elena in the story. Putin-P described "The Voice in My Heart O" and subsequent songs as the climax of the series. The incidents in Russia are described in more detail in Part 3, rather than Part 2 which only described Len and Rin's flashback. Elena's identity and role, as well as Teppannov, are revealed, clarified by Numtack05 to also be flashbacks into the Russian era.

This is also the Part where all of the main characters enter the data world. While the final "battle" and ending takes place in Part 4.

Out of all the sections, Part 3 has the most songs.

The final Part of the series, It tells of what Camui, Len, Rin, and Miku did in the Data World.

Len wanted to reach Rin but Camui stopped him; the two had a verbal confrontation before they started to wrestle, but Camui was defeated by Len.

Rin reminisces on her entire history before saying her farewells and resolving to go out on a high note. Her eyes go completely blank and alternatively erasing Rin's entire memory.

Miku met Ronald and, seeing him as reticent and with a "sleeping heart" and decided to remain in the Data World with him while nonetheless leaving Rin's interior. Consequently, Len is now the only one left, not counting a blank Rin.

Len and the blank slate Rin both went sight-seeing around Tokyo and after reminiscing on the past, Len finally confesses his love to Rin.

In the credits a final song is sung by Miku, representing Teppannov, showing a little comic of Teppannov trying to assassinate Putin. After wishing for a better future with himself and Elena, he is shot by 2 men under Putin's command.

There are 'Extra' songs that are available in Putin-P's albums:

2 Songs in Putin-P Part 1 "Don't Leave me Alone." which weren't uploaded are:

3 Songs in Putin-P Part 2 "The Night that Can't Be Seen, the Eyes that Don't Vanish" which weren't uploaded are:

4 Songs in Putin-P Part 2.5 (consisting of songs in between Part 2 and Part 3) which weren't uploaded are:

Retrieved from "https://vocaloid.fandom.com/wiki/Putin-P_Series?oldid=980142"
Community content is available under CC-BY-SA unless otherwise noted.