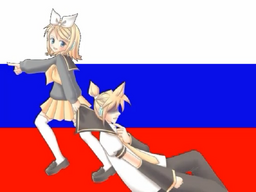 Part 1 of the Putin-P series is the first part of the series, with 9 songs.

(Further timeline on each parts)

This is the first full PV uploaded for this series; unlike any single-illust PVs in Part 2 or 3; thus making it harder to decipher. The first shows the usual video opening, the only difference is only Rin and Len are there instead of Putin. However, notice Rin's uniform. It's white; unlike the others, while Len was wearing his usual Vocaloid costume.


Next shows Rin in her kitchen, making chocolate for Len. On the shelves you can see pidan, and vodka (references to Russia). On the counter next to Rin there's a bottle of poison (?), chili peppers, and someone with red shining eyes in the fridge.


Speed forward; Miku's finally shown in the series (though just for a second). Pay attention to their uniforms. Miku is still using her usual school uniform (as seen on Part 2) Rin wears a different darker uniform (than the one shown on the opening) and Len was wearing; not his Vocaloid costume, but a different uniform; similar to Rin. Considering they went to the same Junior High in Part 2, there's a possibility that Rin and Len transferred school for unknown reasons to Miku's school. Thus explaining the new uniforms. Interpretations are still open.


Next shows Rin daydreaming on her bed about Len. Take a better look at Len's front uniform. From the looks of it, he's just wearing a vest to cover his Vocaloid costume; (however, his pants are different than his usual Vocaloid costume.)


Next; Len is in school, wearing his usual Vocaloid costume. He didn't seem so pleased to see Rin on Valentine's Day.


After Len ate Rin's chocolate he began striping off his shirt. Though it could be an illusion, real buildings and people could be seen there, it's probably a city somewhere in Tokyo.


Notice the red subtitles along with Rin's red eyes it (changes from pink to red). Throughout the series Rin's eyes never changed to red (except in The Broken Mirror) whenever she changes her personality to Red!Rin.


In the finally scene - Len ran away screaming from Ronald and Abe.

The first illustration shows Rin, waiting for Len. She was wearing free normal clothes (not her Vocaloid costume). In the background it can be seen, her usual Putin-P costume in the series (she starts wearing it in Part 2). On the table were her tea, jelly and salt. Along the way, Mochoko's doujin of the Putin-P series are there (which can be read in her pixiv account here.


The second illust shown, before everything went blurry, was the same Rin; a bit of jelly on her tounge, and her tea has a large amount of salt in it (so large it doesn't even sink to the bottom).


Next comes Ronald with a gun - ready to shoot Rin.

Retrieved from "https://vocaloid.fandom.com/wiki/Putin-P_Series_(Part_1)?oldid=850406"
Community content is available under CC-BY-SA unless otherwise noted.