Her VOCALOID3 voicebank was only obtainable through the magazine, Vocalo-P ni Naritai.[2] Due to the method of obtaining Rana's VOCALOID3 voicebank, she was a Japan-exclusive VOCALOID and it was impossible to receive a full version of her voicebank if people did not have a Japanese address to send the tickets from.[3] She is the first VOCALOID released with permanent restrictions preventing overseas users from obtaining her full copy due to legal reasons.[4] However, since her release on the VOCALOID4 engine, she was made available to overseas fans.

Her birthday is on September 9, the birthday of her voice provider Ai Kakuma.

Her design is based on a rainbow. She has amps on her head that give off a rainbow light when she sings. It was revealed that the the rainbow motif was chosen to represent producers' creative freedom when using Rana. The company described it as “so you can color with the color that best represents you”.

Her hood is in the shape of a bear when it is pulled over her head. The light bulbs on her head fit into two cutouts on the hood, making them resemble a bear's ears.[5]

On her VOCALOID3 design, the 5 digit number on her cheek is unique to each user who purchases the magazine.[6] However, according to an official twitter message, her official number is "00001".[7] On her VOCALOID4 design, this number was replaced with "Rana V4".

On April 1, 2016, a April fools' day joke appeared about Rana quitting VOCALOID to become a "Magical girl" and a version of her was shown in sketch form of a "magical girl" design. This design turned out to be the design later used for the Mobile VOCALOID Editor version.[8] Her companions also became part of the design: Morio Shishou became a magic wand while the rest became hair decorations of some form. She was the only Vocaloid released for the App to have a new design.

Rana has been marketed by the VOCALO-P ni Naritai! magazine as a tutorial guide for beginners of VOCALOID software. Due to the company being unable to conduct business overseas, all marketing strictly targeted the Japanese producer base, so registering the purchase of the magazine required consumers to live in Japan.[9][10]

These tutorials covered how to use the VOCALOID software, as well as how to use Singer Songwriter 7 Lite for Rana and the 3D animation software MikuMikuDance. A 3D-model of Rana was included with every installation disk.

During the month of September 2014, the developers of We've Inc. held a NicoNico Douga Commemorative Live Broadcast.[11] To further pursue those outside of the VOCALOID culture, the company proposed a campaign for a VOCALOID Study Group for students in junior and senior high school.[12]

There were Official LINE stickers made for Rana and her friends. These were illustrated by Mokeo.

Rana
Rana was intended to be a beginner's VOCALOID with an easy to use vocal. As such, the vocal is fairly simple to use for beginners as a first vocal and is intended to be used for learning how to use the software while acting as an introduction to VOCALOID itself. The Rana vocal was designed to sound like a young female vocalist with a tomboyish tone. 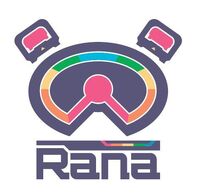