Later, on September 8, Rana was confirmed to have a VOCALOID4 update in the works.[2] It was announced on the NET VOCALOID Site that Rana's V4 would be released sometime in December.[3]

At THE VOC@LOID M@STER 33, the first 100 visitors to the "Rana Experience" booth had a chance to get Rana V4 early. It was also mentioned that there would be a discount for customers who purchased all 30 of the magazines that corresponded with her VOCALOID3 voicebank.[4][5]

It was revealed after the event that she would go on sale on December 1.[6]

On November 14, pictures of her MMD models and VOCALOID4 design were revealed.[7] 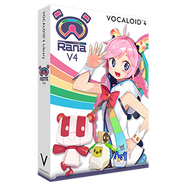