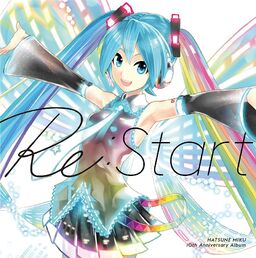 "Re:Start" is an album created to commemorate the 10th anniversary of Hatsune Miku. It features songs from popular artists; including a brand new song from wowaka, who hasn't published a new VOCALOID song in over six years. Disc one features all new songs while disc two features popular classics.