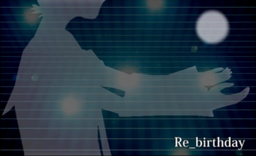 Re_birthday is a song by mothy featuring Kagamine Len.

A boy awakens in a room to find that he's alone in a never ending darkness, tied by red handcuffs and blue shackles. A woman's voice tells him that he'll never escape the room and the memories of the sinful life he lead comes flooding back. One day after having spent an unknown time in the room, he hears someone singing a lullaby to him to sooth and heal him and eventually he adds new lyrics to the song.

After some time, the boy receives a message sent by a person he presumably knew when he was free. The room lights up and the red handcuffs' and blue shackles' voices tell him he is about to be reincarnated.

Retrieved from "https://vocaloid.fandom.com/wiki/Re_birthday?oldid=1052558"
Community content is available under CC-BY-SA unless otherwise noted.