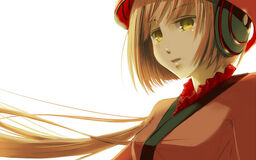 “ In Ainu, "An Kamuiru Peka Rera Ikesampa" means "Through the animal path (the path that the deities have traveled), I chase the wind".”
— Author's comment

"Rera" is an original song composed by Daisuke-P with Nekomura Iroha and one of his most notable songs.

In July, 2011 a version using Miku Append was uploaded on Daisuke-P's channel and reached more views than the original.

Both versions have entered the Hall of Fame.

Retrieved from "https://vocaloid.fandom.com/wiki/Rera?oldid=1047599"
Community content is available under CC-BY-SA unless otherwise noted.