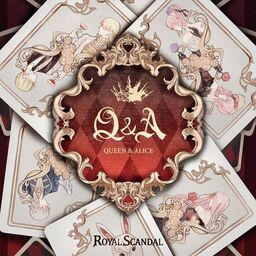 The series is the main project of the similarly named Royal Scandal doujin circle, with luz as the circle's primary vocalist, and sponsored by the XYZ Project. Each installment of the song series (excluding Royal Flash and Cherry Hunt) is simultaneously released with a Luka version and a luz version.

The series breaks into episodes, starting from episode 0 to episode 9. The first season of songs was eventually compiled into the album Q&A ~Queen & Alice~ and the mini album REVOLVER, but both albums only feature the luz versions of the tracks.

All tracks written by KANON69.

Retrieved from "https://vocaloid.fandom.com/wiki/Royal_Scandal?oldid=1067175"
Community content is available under CC-BY-SA unless otherwise noted.