SF-A2 codename miki (SF-A2 開発コード miki) is a Japanese VOCALOID distributed by AH-Software Co. Ltd. in collaboration with HEARTFAST, and was initially released in December 2009 for the VOCALOID2 engine. She was updated to the VOCALOID4 engine in June 2015.[1] Her voice is provided by the Japanese female singer-songwriter, Miki Furukawa (フルカワミキ / 古川 美季; Furukawa Miki).

Often shortened to just "SF-A2 miki", her codename of "miki" comes from her provider's name "Miki Furukawa". In Japanese, 'codename' or 'development code' translates as 'kaihatsu koudo'. The meaning of the "SF-A2" part of her name has never been stated.

Her VOCALOID2 design was unique among the VOCALOIDs. She had no references to YAMAHA based musical instruments and was designed to look cybernetic, giving her a more sci-fi look than most other VOCALOIDs at the time.[2] She generally has a star-theme motif and has a star symbol somewhere in every design for her.

According to information that came from the 2012 redesign, miki was designed to look like she was made out of an inorganic material and was conceptualized as an android. Her body was designed to look like that of a child, but also give her the overall appearance of a young teenage female. Though she is an android, she is covered in muscles made from various materials such as carbon nanotubes, but were made loose to give a mild deformed look about them. Having an immature-looking body allowed her to appear younger than she looks, similar to how Hatsune Miku and Kagamine Rin could do the same.[3]

The illustrator also gave an "SFA2 bike" version in 2010 showing miki with her hood up and on a sci-fi themed bike.

Her look was given an overhaul in her VOCALOID4 update and her cybernetic flesh appearance was abandoned. The general science fiction appearance, however, was kept.

She, along with Kaai Yuki and Hiyama Kiyoteru, were introduced to expand the VOCALOID market and to give producers more choices.[7]

Until May 2011, all AH-Software VOCALOIDs were banned from KARENT.

SF-A2 Miki - Natural
The "Natural" vocal is meant to be a realistic representation of the provider Miki Furukawa. At the time of its initial release in VOCALOID2, it was considered the most realistic Japanese professional voicebank. It was also noted for its ability to sound like a different vocalist in different ranges, leading to high potential for voice morphing thus allowing it to sound very different to its raw unedited state. 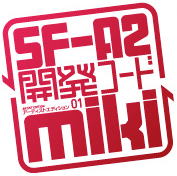