Zero-G felt that a young, carefree singer would make for an overall interesting VOCALOID, providing the fresh and innocent voice that professional singers do not provide. She had several demo songs released.

Sonika has had a Chinese version produced, distributed by E-Capsule Co. Ltd in Taiwan. The Chinese edition came with new boxart. Users can choose to use the original English or Traditional Chinese interface.[1] Because of this, it has an instructional DVD and a comparative table of English and Chinese phonemes in an explanatory leaflet. The leaflet shows her accessibility to about 90% of the Chinese pronunciations. The leaflets were produced by E-Capsule for users in Taiwan to make it easier for buyers to produce natural Chinese from her voice. This version when displayed at its announced convention on 24 and 25 July 2010 came with limited stickers and posters.[2] On August 1, 2010, Sonika was released in Taiwan and became the first VOCALOID to be released in Greater China.[3]

She had several demo songs: "Little Forest", "夢想天堂", "Press that accelerator" and "Scenery".

At the end of 2015, it was announced that from March 31, 2016, VOCALOID2 was being retired and no new serial codes were be issued by Yamaha. Zero-G announced that they would continue to issue import codes to legitimate owners of Prima, SONiKA and Tonio.[4] 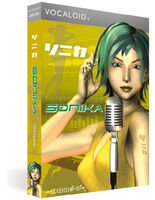 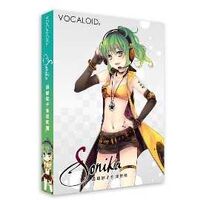 SONiKA was the second English capable voicebank by Zero-G released for VOCALOID2.