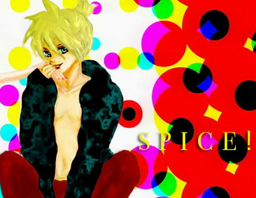 The song was uploaded on March 6, 2008. It's one of Minato's early and most notable works. It ranked first on The Vocaloid Weekly Ranking #25, and on October 28, 2008 it reached The Nico Hall of Fame (over 100,000 views). The song currently reached half a million views on Niconico. Several parodies and utaite covers have been made.

The song depicts Len as a womanizer and a playboy who sleeps with and leaves women and thinks love is 'just a game'. However, although he declares himself a Casanova, he knows his inner sorrow incapacitates him to love. In the end, all his succumbed feelings spiral out.

Retrieved from "https://vocaloid.fandom.com/wiki/SPICE!?oldid=1088592"
Community content is available under CC-BY-SA unless otherwise noted.