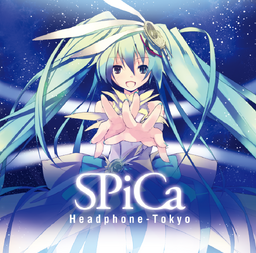 "SPiCa" is a song featuring Hatsune Miku by Toku-P. This song depicts Miku as the Star of the Night sky, forever watching and loving us from above. She also travels each passing night, forever watching over us, looking over us; she sings her sorrow of saying goodbye as the sun rises, as each day holds a bright star that can't be seen.

The meaning behind the song is debatable, and many interpretations arise from each action in the song.

Together we watched
The stars filling the window
Reflecting us

I said I liked you, but you looked away
You pretended not to notice
Enough already! ><

When you're beside me
My orbit is always
Circumpolar

I can't comprehend the angles of
Your thoughts, rippling like a tremolo
And if I chase you

The feeling I'll lose something
Floats up, and sails away

Embrace me! We'd be on our own had we never met
Catch me! I'll leap over Denebola
A precession that heeds no one just like you, my star
As I chase you, a panorama comes into view
Above the music lines, I see a shooting star
I'm going to sing, so shine bright, SPiCa

I want to laugh, I don't want to be alone
I want to hear your answer, even if I'm too scared to listen

I've spent so many nights
Just making my way... into the future

I searched, avoiding the twinkling stars
Asking whose side the myths are on

With a sigh, I mark this blue afternoon
I think of you, and mutter your name
But such a shallow love could never reach you
I want to see you so badly,
The sound of my piano overflows with pain
I hope the lingering echoes reach you

Embrace me! We'd be on our own had we never met
Catch me! I'll leap over Denebola
A precession that heads no one just like you, my star
Chase me, and you'll see everything
Above the notes, I see a shooting star
I'm going to sing, so shine bright, SPiCa

Retrieved from "https://vocaloid.fandom.com/wiki/SPiCa?oldid=1102221"
Community content is available under CC-BY-SA unless otherwise noted.