Sakine Meiko (咲音メイコ) is an officially recognized derivative. The term "Derivative" is used here to describe a fanmade Vocaloid character that is based on an already existing character.

She was conceived through the efforts of Producers working with MEIKO's voice, When many producers wondered if MEIKO was an older-sounding vocal, or younger-sounding vocal. (They quickly set on KAITO's voice since he sounded older.) Because of this, MEIKO had become forgotten because of Hatsune Miku's popularity, leaving her behind. MEIKO in particular did not have the younger sounding voice of the released VOCALOID2 voicebanks released at the time and therefore was not as appealing as they were to the Vocaloid Otaku based fandom. 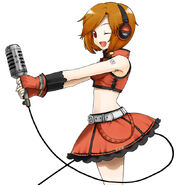 Unfortunately, Nanameue-P has not disclosed the voice configuration so far, though theoretically, she carries a younger voice (and perhaps higher-pitched voice as well) of MEIKO.

Sakine Meiko's design is reminiscent to that of MEIKO. She has light brown hair styled into teased bob. She has a side swept bangs and her eyes are brown and large, done in a style similar to illustrator Kei. On her left upper arm is the black mark "00 MEIKO", its significance is currently unexplained, though it may likely be homage to MEIKO's mark being CRV1.

In the rhythm game, Hatsune Miku -Project DIVA- (series), Sakine Meiko is an available character. If the player does not choose her for a long time, she will get angry.

Retrieved from "https://vocaloid.fandom.com/wiki/Sakine_Meiko?oldid=941242"
Community content is available under CC-BY-SA unless otherwise noted.