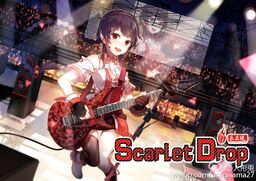 “Who reach upon the edge of the world, and complete this song with me.”
—Author's comment (translated by Moonlight)

"Scarlet Drop" is an original song by Rosary and Hetianye featuring Yuezheng Ling. It is Ling's first original and demo. Luo Tianyi only sings two lines towards the end.

The song tells the story of Ling and how her project as a VOCALOID from 2012 to 2014 was cancelled or dropped and she was being forgotten in time. She struggled through this and was eventually reborn in fire.

This song was featured in the Píngxíng Sì Jiè 3 album.

This song was featured in following concerts:

This song was featured in the Zion video game.

Retrieved from "https://vocaloid.fandom.com/wiki/Scarlet_Drop?oldid=1103756"
Community content is available under CC-BY-SA unless otherwise noted.