"Seattle Wùyǔ II" is an original song by Ddickky featuring Luo Tianyi and Yuezheng Ling. It is the sequel to "Seattle Wùyǔ" and shares the same meaning, but told in Ling's perspective. 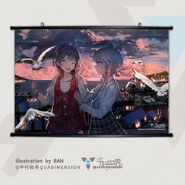 Retrieved from "https://vocaloid.fandom.com/wiki/Seattle物语_II_(Seattle_Wùyǔ_II)?oldid=1201457"
Community content is available under CC-BY-SA unless otherwise noted.