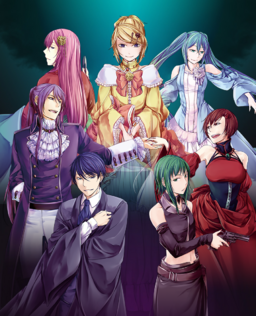 The Seven Deadly Sins (七つの大罪 Nanatsu no Taizai) series is a series of songs made by mothy, also known as Akuno-P. The series is composed by seven songs, all of them are released.

Most of these songs were featured into the album 悪ノ王国 ～Evils Kingdom～ which was released on December 22, 2010.

The series focuses on the "Cardinal Sins", the vices used since ancient Christian times in order to instruct on the morality of humanity. While more minor sins, "venial sins", could be easily forgiven through sacraments, the cardinal sins would lead one to eternal damnation if not absolved through Penance or perfect contrition.

The theme is common in Catholic tradition. The definitions have changed throughout the years, but there is a general agreement on the current seven with their current Latin names.

Due to the events of the Original Sin series, the Seven Deadly Sins were spread around the world therefore tainting it. After their creation, the Sins have been changing their shape and owners, being eventually stored in different objects denominated the Vessel of Sins. Different persons, groups or organizations during that history tried to recollect them, each one with their own personal goal or intention.

The series focus in 7 songs, 7 moments in The Evillious Chronicles when the Seven Deadly Sins reached their climax, causing massive suffering and death.

Songs associated with the Deadly Sins

After the success of The Daughter of Evil novel series, mothy announced on his blog the release of a new novel series dubbed as Deadly Sins of Evil (悪ノ大罪), which he promises deepens the story behind each song.

1. Deadly Sins of Evil: The Lunacy of Duke Venomania

3. Waltz of Evil: The Deadly Sins of Evil Guidebook

4. Deadly Sins of Evil: Gift from the Princess who Brought Sleep

6. Deadly Sins of Evil: The Tailor of Enbizaka

8. Deadly Sins of Evil: The Muzzle of Nemesis

9. Deadly Sins of Evil: master of the heavenly yard