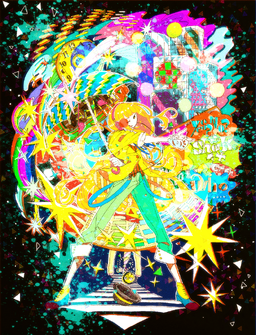 "shake it!" is an original song by emon(Tes.). On a night of despair and loneliness, the singer opens a secret door and enters a never-ending, dream-like night.

The song's official PV features bright colors and dark backgrounds. Everything is highly stylized, and the overall video is almost psychedelic in style. A girl is featured heavily and is presumably the singer; she wears pink headphones, a yellow coat, and loose suspenders. Through much of the PV she is standing on a stage area in front of crowd of gray, shiny humanoid figures next to a DJ booth staffed by a figure with emon's logo as his head. The booth itself has the word "emon" written in yellow letters across the front.

This song has entered the Hall of Legend. It is featured in the albums emonloid4, VOCA NICO☆PARTY, and Hatsune Miku "Magical Mirai 2014" Official Album. A cover was featured on the album EGOIST II. 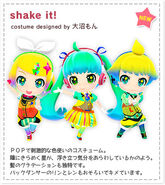 Retrieved from "https://vocaloid.fandom.com/wiki/Shake_it!?oldid=971439"
Community content is available under CC-BY-SA unless otherwise noted.