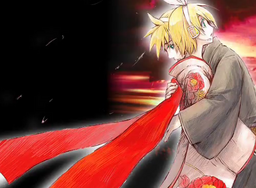 The lyrics are derived from poems by Haruo Satō (佐藤春夫). "siGrE" is a stylized spelling of shigure, Japanese for "rainshower".

It tells of two people (Rin and Len) who were once lovers; though for one odd reason the man had either forgotten or not recognize his love after leaving for a trip. Shocked of not being remembered the woman asked "siGrE" to tell that she can't sleep thinking about him.

As time passed, the woman died; leaving the man with tears. It was then when he realized "the green summer" they once spend together. He then asked "siGrE" to tell that he can't sleep; thinking about her at night, though she was already gone.

Retrieved from "https://vocaloid.fandom.com/wiki/SiGrE?oldid=1144128"
Community content is available under CC-BY-SA unless otherwise noted.