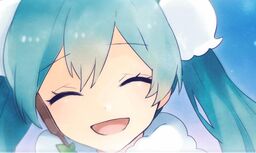 “A new singing voice will once again fly down from the sky.”
—40mP

"Snow Fairy Story" is a song by 40mP that was commissioned for the SNOW MIKU LIVE! concert in January. Other than its respective concert soundtrack, it has not been featured on any albums.

This song is featured in the following concerts:

Retrieved from "https://vocaloid.fandom.com/wiki/Snow_Fairy_Story?oldid=940020"
Community content is available under CC-BY-SA unless otherwise noted.