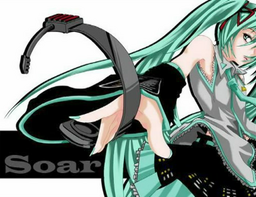 "Soar" is an electropop song by minato, who would go on to produce the popular songs "magnet" and "RIP=RELEASE". With over a million views, "Soar" is one of Hatsune Miku's notable early songs and has entered the Hall of Legend. It is featured on the albums delicious, magnet -favorites plus-, and EXIT TUNES PRESENTS STARDOM. It peaked at #1 on the Weekly Vocaloid Ranking during week #25.

The illustration accompanying the song's original upload has been removed from Piapro by its artist.

Retrieved from "https://vocaloid.fandom.com/wiki/Soar?oldid=951486"
Community content is available under CC-BY-SA unless otherwise noted.