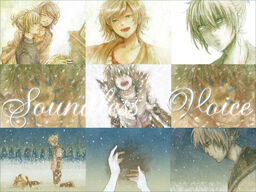 "soundless voice" is a song featuring Kagamine Len by Hitoshizuku-P and Yama△. It became quite popular with over half a million views, and a month after it was uploaded, Hitoshizuku-P uploaded an "answer song" to tell Rin's version to the story. This song is Hitoshizuku-P's "P name origin"; in the lyrics of the song, a part of it said "Hitoshizuku".

The story of Len, who watches over Rin. She was dying and Len was worried about her health condition. Unfortunately, Rin's condition worsened and nothing could have been done about it. When her time finally came, it was revealed later that Len had always wanted to tell her that he loved her; but it was too late.

Below is an unofficial English translation: via Project DIVA. Amendments may have been made to the original translation. —Featured in Hatsune Miku -Project DIVA- F 2nd

On a night when silence blankets the town
The whiteness keeps falling down into my upheld palm
Melting the instant I touch it, a fleeting "fragment"

Soundlessly it piles up
Gathering the light, you laugh
What's that sound just now?
Even if I answered you
You cannot hear a thing

Tell me it hurts
Tell me you're lonely
I'll go to you, wherever you are…

Don't depart, don't go anywhere
Don't leave me here… together, you and me
Were always supposed to be one

"I love you", but I could never say it
The door closes
Forever on my world with you

I call, but it doesn't reach you
Your voice is… gone

Even the fleeting life of my voice
Vanished everything

Concept art of the Soleil and Ciel modules

PV illustration of Rin in the remake

PV illustration of Len in the remake

PV illustration of Len holding Rin in the remake

Retrieved from "https://vocaloid.fandom.com/wiki/Soundless_voice?oldid=1102355"
Community content is available under CC-BY-SA unless otherwise noted.