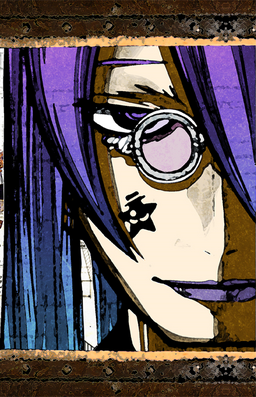 Star Girl and the Illusion Paradise (星ノ少女ト幻奏楽土) is a series by Story Researcher (doujin group formed by cosMo and GAiA). CosMo is in charge of the music and illustration, while GAiA collaborated with him in the lyrics.

All songs in the series were collected into the album Hoshi no Shoujo to Gensou Rakudo. A crossfade for the album can be heard here.

A novel adaptation of this series was released on February 4, 2014. The series ended with the upload of " Asamurasaki Iro no Endroll".

This series is the sequel to The Fantastic Garden series.

The story occurs in a strange city known as Stella that grants the wishes of the girls who live there, erasing their sorrowful memories and reality. Though they get what they want, the question is if it will really make them happy, and how long will they try to run away from the truth. While this occurs, a mysterious and obscure character tries to make them all realize the harsh truth, generally with dreadful results, as the inhabitants usually can't cope with it...

These songs are exclusive to the album. Most of them seem to be, like Another Lost Girl, brief dialogues between Dr. Realist and the girls.

Hoshi no Shoujo to Gensou Rakudo novel illustration by syuri22.

Retrieved from "https://vocaloid.fandom.com/wiki/Star_Girl_and_The_Illusion_Paradise?oldid=1124817"
Community content is available under CC-BY-SA unless otherwise noted.