While the exact date of her development is unknown, several clues existence that suggest Sweet Ann may have been headed for a VOCALOID release.[1] PowerFX was known to have joined the production of VOCALOID vocals in 2002, after Zero-G entered production in the UK autumn. PowerFX's involvement was not announced until later, leaving vagueness on when production began on Sweet Ann's early development. She did not begin production during "Project Daisy".

A image in the instruction manual for VOCALOID shows a image with Sweet Ann's codename of "JODIE" featured as the name of a voicebank, "JODIE" being identified as a reference to Sweet Ann's provider "Jody". "TARO" and "HANAKAO" are also names seen alongside "JODIE" in the VOCALOID manual, those being the codenames for KAITO and MEIKO.[2] "JODIE" had also been sighted in Ann related information to do with her VOCALOID2 version.

A demo was also included on Sound on Sound website with other VOCALOID demos. This demo featured a unknown female Vocaloid which sounds much like VOCALOID2 Ann. Wed, 25 Jun 2003 was the date the file was last modified on the site, with the file first being shown, the file was first entered in Sound on Sound May edition of 2003.

Even in later generations, demos of VOCALOID Sweet Ann were known to exist. On the official vocaloid website, samples of VOCALOID can be found; two of those samples contain examples of what appears to be Sweet Ann singing in VOCALOID.[3]

In the VOCALOID2 manual "JODIE2" also exists, it appears alongside another vocal by the name of "RONIE2", "Ronie" generally understood to be the codename of BIG AL, Sweet Ann's counterpart.

Sweet ANN, along with Prima and BIG AL, first appeared at the NAMM March 2007 event. ANN was later announced to the general public in May for a release, just weeks away from her release date.[4]

PowerFX took steps when Sweet ANN was to be released. They advertised her by creating a MySpace page and uploaded demos "Alove" and "Sweet ANN Vs Kitto" to YouTube.[5] Due to time restraints, the VOCALOID2 software was released without public beta testing with both Sweet ANN and Hatsune Miku being released with relatively little testing done to their VOCALOID2 software.[6]

After Sweet ANN's appearance, VOCALOID fell mostly into obscurity in the west due to a change in the trends of the music industry, with the focus of the indie music being taken away from sites like MySpace.[7] This was the circle VOCALOID had mostly been aimed at in the west, although VOCALOID was not the only software to be affected by this changeusic software in general was hit by the change of styles. Sweet ANN was the last of the English capable VOCALOIDs to receive great attention by reviewers for a while and the last VOCALOID to be greatly noticed prior to Hatsune Miku's rise to fame.

Sweet Ann was later released in Japan with her distributors being Crypton Future Media, Inc.. Initially a number copies were shipped without their serial codes. Those without serial codes had to contact their support desk to correct the issue.[8]

Crypton Future Media noted users of LEON, LOLA and MIRIAM would receive preferable sales in addition if they registered by 2nd September, 2007.[9]

On April 8, 2011 a PowerFX employee noted that the designs seen on the PowerFX website of both Big Al and Sweet ANN were that of a Taiwanese distributor of PowerFX products and were not the official designs of Big Al or Sweet ANN.[10]

According to PowerFX, they put the Taiwan boxart on their website to try the oblong shape as they preferred it and were thinking about switching to this shape for their VOCALOID products. The boxarts placement was temporary until they could run a Sweet ANN / BIG AL competition, however they noted the fandom had insisted that boxart be on the page and had to switch back.[11]

Later demo songs "Carry on", "U belong to me" and Shu-tP's classic song "Night of the Magic" were released by E-Capsule. Later Sweet ANN and BIG AL were featured in the song "At your side 2010". Other songs include "Everlasting Love". 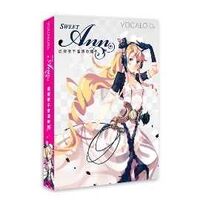