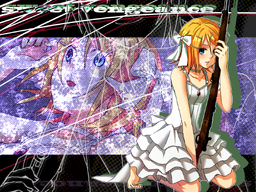 "sweet vengeance" was first uploaded on March 31, 2010; and is 150P's fourth original Rin work. 150P mentioned on his blog and video description saying he wanted to make a VOCAROCK (guitar rock song) with the help of kari on the base.

On October 16, 2010 150P uploaded a short version as one of the entries for the game "Project Diva Arcade". The video and song were cut down shorter, and 150P also mentioned how he wanted to make Rin sound more powerful than she did on the original (which was noted to be rather cute). sweet vengeance failed to win a spot to the Project Diva Arcade contest.

The song tells a story of Rin who simply laughed at herself for being a pessimist. She said she lied to herself on wearing masks, how she wanted to run away from getting a shot or bullets to herself. In the end she just wanted to be treated with love and avoid tears or pain. The plot to the song is rather open, and often most parts of the lyrics could be interpreted as a metaphor and not to be taken literally.

Retrieved from "https://vocaloid.fandom.com/wiki/Sweet_vengeance?oldid=981103"
Community content is available under CC-BY-SA unless otherwise noted.