She is the result of creativity of imagining Luka's hair in the form of an octopus, in the similar as Hachune Miku.

Tako Luka has received official products such as phone charms and plush toys. She is also bundled with a Megurine Luka Nendoroid. If more than one version of Tako Luka is sold of any given item, a lottery is usually established for the item wherein one of 3 faces are able to be bought. However, the buyer will not be able to determine which of the 3 they receive. So far, this has been carried out with the Tako Luka plush doll and the charm.

In the rhythm game, Hatsune Miku -Project DIVA- (series), Tako Luka has made several cameo appearances and is available as an accessory. In the game's PVs, she is usually spotted scampering around the scene or waving her tentacles at the viewer. 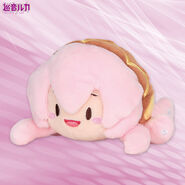 Retrieved from "https://vocaloid.fandom.com/wiki/Tako_Luka?oldid=1006380"
Community content is available under CC-BY-SA unless otherwise noted.