The Chattering Lack of Common Sense

"The Chattering of Teeth and Lack of Common Sanity"
[edit]

"The Chattering of Teeth and Lack of Common Sanity [Revisere]"
[edit]

Basically, I bet you'll see
At first, I'm not quite what I seem
Everyday is just the same
Picking names, repeating faces

Everything is show and tell
And things are played off somewhat well
Holding hands, we're rather bored
Nothing lines up anymore

I could never understand
How first impressions go unplanned
Everybody hides their face
How could I have noticed?

Nonetheless, we're all the same
There's many things from where we came
Show a smile we're rather bored
Nothing lines up anymore

Turn around about a new view
Bring about the fear inside you
Make a storm of tears and anger
Nevermind, don't worry 'bout me

We've disposed of our contention
Do our best; avoid attention
"Just accept the things you know"
Well maybe so... wait...

What is going on here?
I'm a little out of sorts
I've been contemplating
Fallacies and things that scare me

"Why not try to let go?"
I've been feeling out of order
I'm allowing change so...
Take a good look, this is me

Moving along
Dancing along
Playing along
I am

Feeling around
Messing around
Looking at you
I am

Ah, what the hell should I do?
I've been feeling out of order
I've been sorta noticing
Fallacies and that see me

The Chattering of Genocide and Lack of Common Sanity

but it's stock images 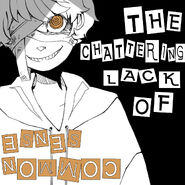