It is a very complicated story, but what we can say as of now is very little. The Shishikusa Clan resides in Castle Town, where they are very powerful. Ryou and Tomonari Shishikusa run a theatre in the town that puts on performances for the other daimyos using kidnapped women. They also have a daughter, Mai. One person kidnapped was Akari, part of a mythical clan called the Oborodzuka Clan. At her performance, she curses Ryou out of malice for kidnapping her. Ryou, who had been called a "worse monster than I" by Akari, enters a fit of rage and stabs her repeatedly, supposedly killing her. Shortly thereafter, Mai is kidnapped and is forced to eat human flesh (and become possessed for a short time). She is found again, but is catatonic for a while. At her 18th birthday party, she snaps and eats both Ryou and Tomonari, and Akari's curse becomes reality. Being affected by the curse as well, she goes on to decimate the entirety of Castle Town. The curse's effects peak when she starts to see the victims of her cannibalism, and is eventually beheaded (possibly by the deity Shikyou). Her head is returned in a basket to Akari.

Small things are known, such as how Akari has a sealed altar in her basement ("Open it? Open it?") that held the founder of her clan, Tsukuyomi; how Shikyou manipulated Mai's fate ("They were doomed to never meet") and went distraught when she found out things weren't going as planned (hence the screaming in Oni Mikage Enbu Kyou).

The finale of the series is still blurry and not known.

The story order is as follows:

"Star Lily Dance Performance" is a "what-if" scenario where Mai and Akari get a happy end.

"The Demon Child in the Clear Mirror" is related to the series, and occurs at the same time as Beheading Dance, but is not considered part of the main storyline.

It shares its universe with Maha's Story.

More info on the characters to be added soon. 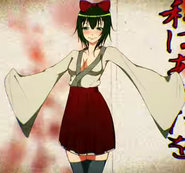 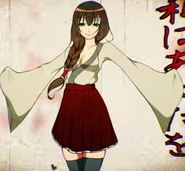 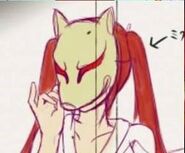 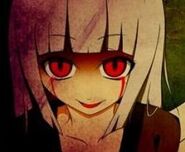 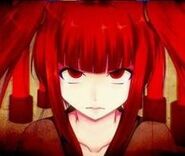 Her appearance in The Fox's Wedding remix

Akari is a member of the Oborodzuka Clan and is the sole member that is not physically disabled somehow. She endured abuse from her family because of this, and eventually gained the power to make other people hurt themselves.

She imprisoned a violent and evil character named Tsukuyomi inside of an altar in the basement of her home, and this altar may be what was commonly being referred to with the recurring line, “Open it?” Tsukuyomi was actually the founder of the Oborodzuka clan and is freed centuries later in another Masa series known as Maha’s Story.

In The Spider and the Kitsune-Like Lion, Ryou Shishikusa kidnaps her and tortures her until she dies. At the end of the song, Akari curses her family, saying that this “strange habit of eating people” must be continued for a hundred generations. This seals Ryou’s fate, and Ryou is later eaten by her daughter Mai as part of this curse. 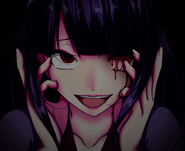 Official appearance in the remix of The Fox's Wedding

Emi is, symbolically, the “Doll” mentioned throughout the series. Her ancestors were evil gods, and thus, everyone came to hate her. She bears a grudge against these people but tries to ignore their feelings at the same time.

Retrieved from "https://vocaloid.fandom.com/wiki/The_Story_of_the_Kitsune_and_the_Demon?oldid=964082"
Community content is available under CC-BY-SA unless otherwise noted.