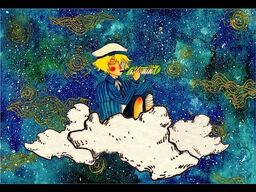 The song tells the story of a umbrella salesman who attempts to sell magic umbrellas. However, he faces constant shunning for his outrageous claims about the umbrellas "magic". In the end, in an attempt to prove they are magical, he climbs a 40 foot building and shouts out to the people below him his sales pitch. Upon which he leaps into the sky while holding an umbrella.

Afterwards, his umbrellas are left scattered on the ground, to which the people of the city finally buy them.

According to Steampianist and Morbid, the song either has a sad ending or a happy (the salesman dies or floats away), depending on your point of view.

This song is featured in the album, Absurd Stories For The Rationally Insane. At one point the song also featured on Gasp radio every Thursday.[1]

A busy young salesman
goes from door to door
selling magic umbrellas
see such wondrous sights!
But no one believed him
not a single word he said
he knocked on all the doors
but no one answered him
this left the man depressed
For no one bought an umbrella from him

no one wants his umbrellas
theres no such thing as...
magic

so the man found his way to the top...
of a forty foot building...
as he gazed upon the city
the people look to him...
he's determined to show them all.
he will prove his umbrellas are magic.
with a firm resolve
and a strong clear voice
he shouted out his...
sales pitch

everything stood still
the city was silent
did the umbrella work?
everyone was lost for words
but the salesman did in fact...
touch the ground and felt the sky
then the people took each an umbrella
and left the money on the
ground

Retrieved from "https://vocaloid.fandom.com/wiki/The_Umbrella_Salesman?oldid=976400"
Community content is available under CC-BY-SA unless otherwise noted.