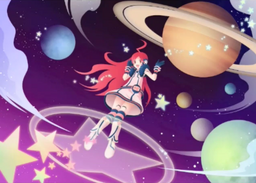 The exact story behind the song is unknown, but there are a few theories: One idea could be about someone looking everywhere for their true love when they suddenly fall into an unexpected situation with the "one", and then taking a chance and confronting them; this can be depicted from miki singing about "flying through space", when she suddenly "fell through a gap" in which "two people guided" by "the gravity of fate" met by chance. She then says "without hesitating, I take the plunge", meaning that she possibly confronts the person. Another interpretation is that she is literally flying through space when she meets someone, then asked by that person to join him/her in space, or possibly the song is simply about two people meeting each other (basically a love song).

Retrieved from "https://vocaloid.fandom.com/wiki/The_Universe?oldid=1033713"
Community content is available under CC-BY-SA unless otherwise noted.