"Those Who Carried On" is a song featuring YOHIOloid and GUMI English by GHOST. The story was about a contagious disease going around that would cause people to decompose alive and fall apart, the different characters represent different aspects of this disease. The robot girl in the first verse was the treatment in a sense. Once humans figured out how to make robots that could act like normal humans, they were able to learn how to make prosthetic limbs that could function just the same, only in response to a pre-existing brain. The girl who fell apart at the beginning was the late stages of the disease where you fully break down and medical intervention is unavoidable. The two characters at the beginning, as well as the body parts repair man, represent having recovered from the disease. While there's still the risk that what's left of their organic bodies might catch the disease again and continue decomposing, they've been through it all and can handle it again, and don't let fear stop them from living happy lives. The person locked in the room is someone who's too afraid to leave the safety of a sterile room and risk catching the disease, and unlike the three mentioned prior, is living in misery.

Inside their little world,
They tried to be understood
But all that came of it was a mess
So sort it out in conversations
Devout apparitions
Would say they’re horrid nonetheless

Once more, their heads are caving in
There’s a window that jarred on their conscience
Once more, they’ve left remembering
To the people who picked up their arms and legs
And carried on

They pulled apart their own ego at the seams,
And spilled their organs everywhere
Caught in polarized degrees
They may decay again, so beware
These are people too backwards to die out
They may never escape from the rise, now
They may never come back

Crumbling still,
Their little world rebuilt
What couldn’t be endured
Now, there’s nothing left to go to waste
So sort it out with new perspectives
Reused and defective,
They challenged odds face-to-face

So after all these years,
They remained a form of art
‘cus they had problems from the start
Though they acted on a dare
There’s nothing stopping them, so beware
These are people too fearless to die out
Though they’ll never escape from the rise,
Now…

This song was featured in the Those Who Carried On (single). 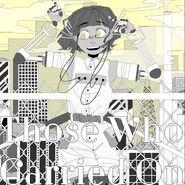 The cover edit for the single.
Add a photo to this gallery

Retrieved from "https://vocaloid.fandom.com/wiki/Those_Who_Carried_On?oldid=949502"
Community content is available under CC-BY-SA unless otherwise noted.