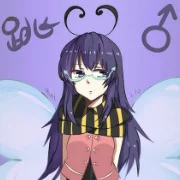 Tiaonan-P (跳蝻P; Tiàonǎn-P) is a Chinese producer who made his debut in July 2012. While he does not specialize in any particular style, he is known to work with pop, folk, dance, rock, metal, and electronic genres.

Retrieved from "https://vocaloid.fandom.com/wiki/Tiaonan-P?oldid=888545"
Community content is available under CC-BY-SA unless otherwise noted.