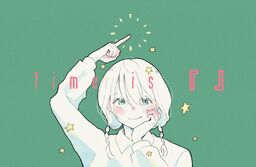 Time is 『』 is an independent compilation album released under the group Link Records. The album's concept centers around a complete 24 hour day, with each song representing a 2 hour period.

Retrieved from "https://vocaloid.fandom.com/wiki/Time_is_%E3%80%8E%E3%80%8F?oldid=1027659"
Community content is available under CC-BY-SA unless otherwise noted.